How to find cases, statutes, regulations, and other law-related material

What's in This Guide

This guide to legal research emphasizes publicly accessible resources for locating cases, statutes, and rulings and regulations. You will find:

Know before you go:

1. There are three kinds of law and they all exist at both state and federal levels:

2. Federal resources are much easier to find than state ones.

3. Know as much as you can before searching:

The chart illustrates the three branches of government (legislative, judicial, and executive) and the documents they produce. The federal government and state governments run on parallel paths. Although the chart features Connecticut for obvious reasons, most states function similarly.

The arrows are meant to convey that all three branches interact with each other. For example, the Connecticut Assembly might pass a law requiring school buses to stop at railroad crossings. The relevant state agency will be empowered to pass regulations that enforce the law, such as fines or jail terms. If someone challenges the law or a regulation, the courts are called upon to rule on its validity: does it violate the state or United States Constitution or other laws already in existence at the time the bill passed into law. 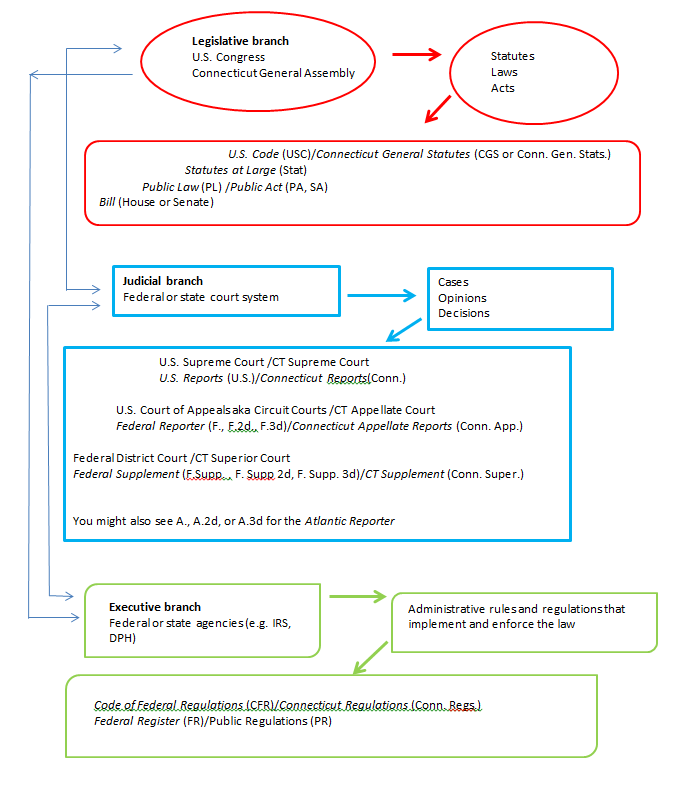