The First Chinatowns on the East Coast

This is a street with the longest history in Chinatown But you never say why! -Qian Li 5/4/10 10:29 AM  . It is also named as Zhe Zack Zeng Street, named after an immigrant from Guangdong Province, China. On Sept. 11, 2001, Mr. Zhe witnessed the planes crash into the Twin Towers. He was among the first rescuers at the scene but was killed when the building collapsed.  Give a date here -Qian Li 5/4/10 10:26 AM To honor Mr Zhe's sacrifice, the city renamed the street after him.

Not only is it an important street connecting Brooklyn and Manhattan, but it is also an important street in Chinatown. It's built over a filled canal of the same name. During the first half of the 20 th century, Canal Street and Bowery Street acted as the center of the jewelry stores. While as today, Canal sees thousands of tourists every day, viewing and buying perfumes, watches, bags, accessories, CDs, many of which are imitations (fake brand).

Along the Centre Street, there are many government buildings. Connecting the NY Detention House and the Criminal Court on 125 White Street is the Bridge of Sighs. On each side of the Bridge, there is a statue of a court case. One depicts Judge Bao Zheng (qingtian) from China deciding who the child belonged to by having the two women do a tug of war on the child and gave the kid to the woman who gave up. The other is about Solomon having the two cut the kid into two to settle the case.

Chatham Square used to be where seven streets meet and was a place where household goods were sold until the end of the nineteenth century.  After the WWII, Kim Lau Memorial Arch was built here in memory of the Chinese-American soldiers who sacrificed their lives in the war. It was named after Second Lieutenant Benjamin Ralph Kimlau. In 1997, a statue of Lin Zexu was set up in the square. He was a Chinese scholar and official during Qing dynasty. He is most recognized for his conduct and his constant position on the "high moral ground" in his fight against the opium trade in Guangzhou.

Located at 215 Centre Street, this is a good place to find out about the history of Chinatown. Every year , a variety of exhibits, ESL classes, lectures, book sales and book discussions take place here.

Mott St., Pell St. and Bayard St. are among the oldest streets in Chinatown. The Chinese immigrants came to Mott Street in as early as mid-nineteenth century. There are all kinds of stores on this street today.

Not only is it a major street in Chinatown, but also it is a street where The Genco Olive Oil Company from “God Father” was located on as well as Detector Dorus Noel by the famous writer Arthur J. Burks resided.

Established in 1883, CCBA is the oldest organization in Chinatown and the center of the Chinese community. It has played the role of a local government and collaborated with other major organizations in providing services to the oversea Chinese in history. On Dec. of 2006, CCBA signed a memorandum with the American Red Cross in Greater New York to guarantee its participation in training and assisting Chinese communities in the handling of any emergencies.

To the north of Chatham Square is the biggest residential building in Chinatown “Confucius Building” completed in 1975. The statue of Confucius was established in 1976 in front of the building. This 44-floor building offers affordable housing for thousands of residents. The building also includes a public school. Because of its central location, many people had to remain on the waiting list for over 20 years before they could move in.

Chinese population % in U.S., locations of the largest Chinatowns 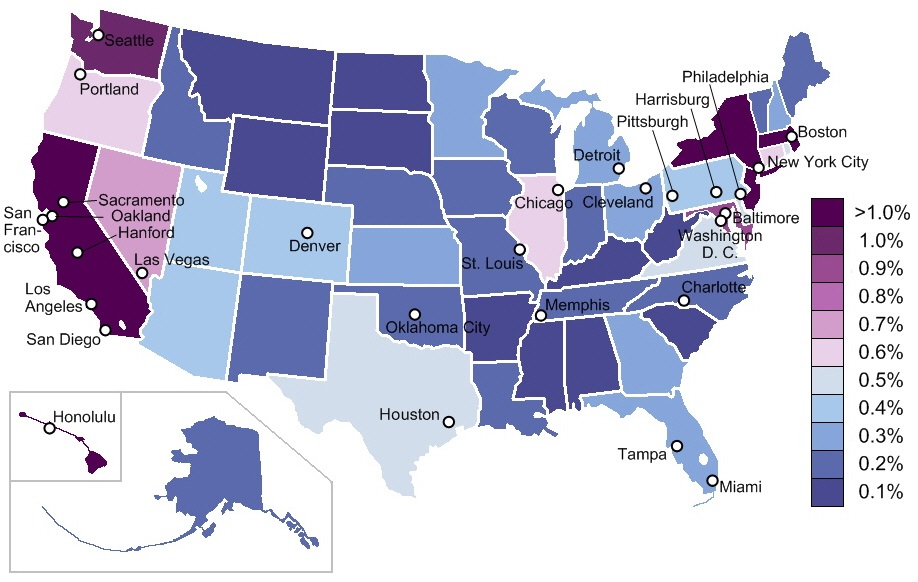