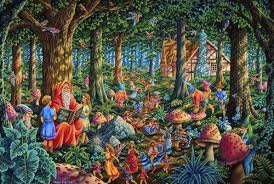 Armenian Fairy Tales
Read Armenian folk tales collected from authors Andrew Lang and A. G. Seklemian in a collection suitable for children of all ages.

Fairy Tales
Resources from Pace University. Contains "a variety of scholarly resources on the web".

Folklore and Mythology Electronic Texts
This site is created and maintained by D. Ashliman of the University of Pittsburgh.

Hawaiian Folk Tales
This is an anthology of Hawaiian folk tales and includes articles that were published in early nineteenth or twentieth century.

Japanese Fairy Tales
This is a collection of Japanese fairy tales translated by Yei Theodora Ozaki.

Legends
You can explore the world of legends at this site by Paula Kate Marmor. Links to primary sources, scholarship, essays, and  historical surveys.

Little Red Riding Hood Project
This is a text and image archive of sixteen different versions of the tale at the University of Southern Mississippi.

Marvels and Tales - Journal of Fairy Tale Studies
The home of the peer-reviewed journal which publishes articles that are international in scope.

Open Directory - Fairy Tales
A directory of tales resources broken down by categories.

Snow White
Translations of Snow White and other fairy tales by D. Ashliman.

Stories, Folklore, and Fairy Tales Theme Page
Contains curricular resources for students and teachers on the theme of fairy tales.

The Sur La Lune Fairy Tale Pages
A very comprehensive site that contains 49 annotated fairy tales and their histories as well as similar stories from other cultures. Includes over 1600 tales from around the world.

World of Tales
Contains stories for children from around the world.